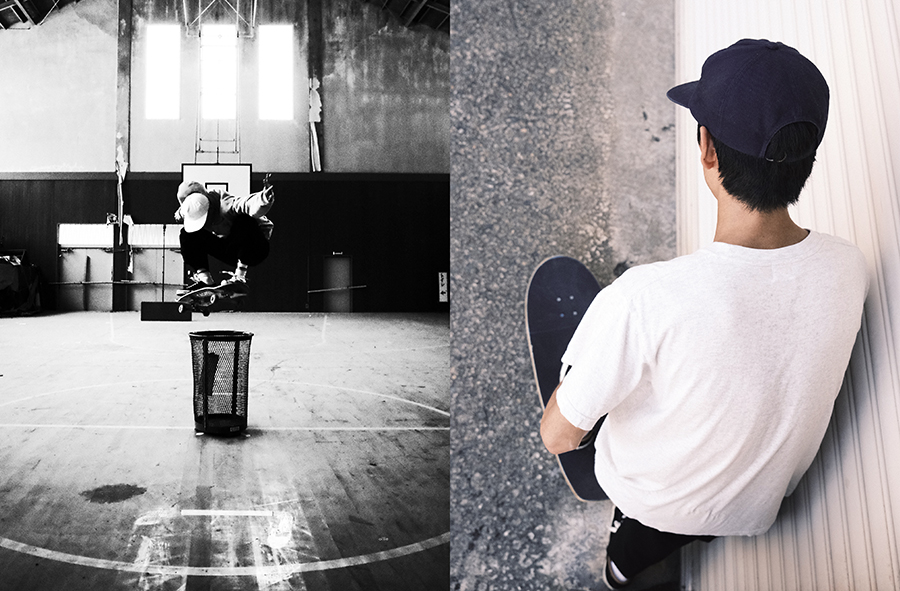 日本全国のスケーターを独自の視点で撮り下ろす、
デュオフォトグラファー「川」。
彼らが手がける紙媒体『川』は、
今のリアルな日本のスケートシーンを伝える貴重な存在となっている。
その内容はスケートボードのように自由な発想に満ちて、読者の心を躍らせる。
『川』の編集者が、その魅力を語る。
KAWA is a duo photographer who captures skaters
from all over Japan from their unique perspectives.
Their print publication “KAWA” archives photos and the voices of skaters.
It is a valuable source of information about the real skate scene in Japan today.
Its content is as free-floating as skateboarding, inspiring viewers other than skaters.
The editor of “KAWA” talks about its appeal. 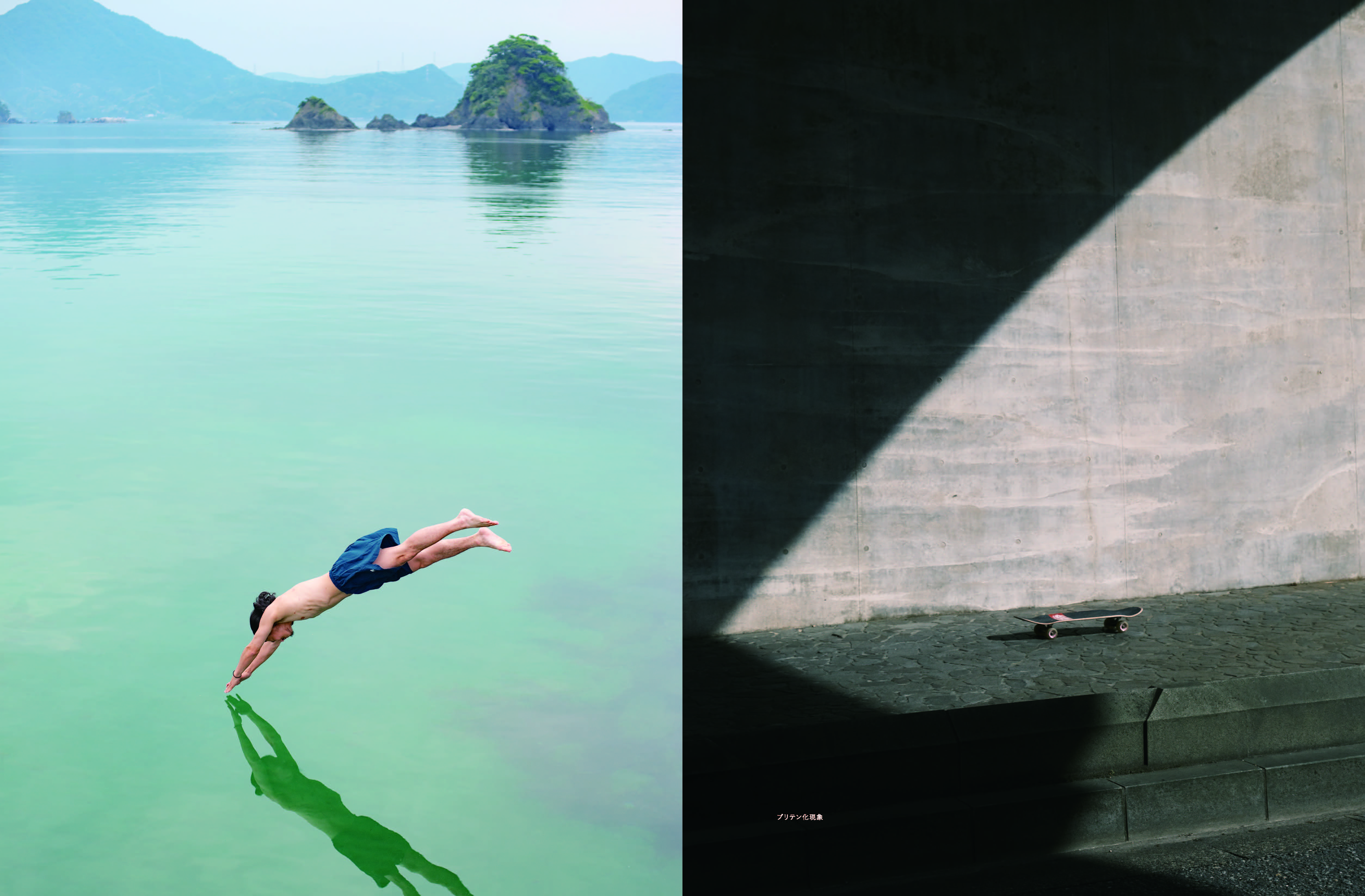 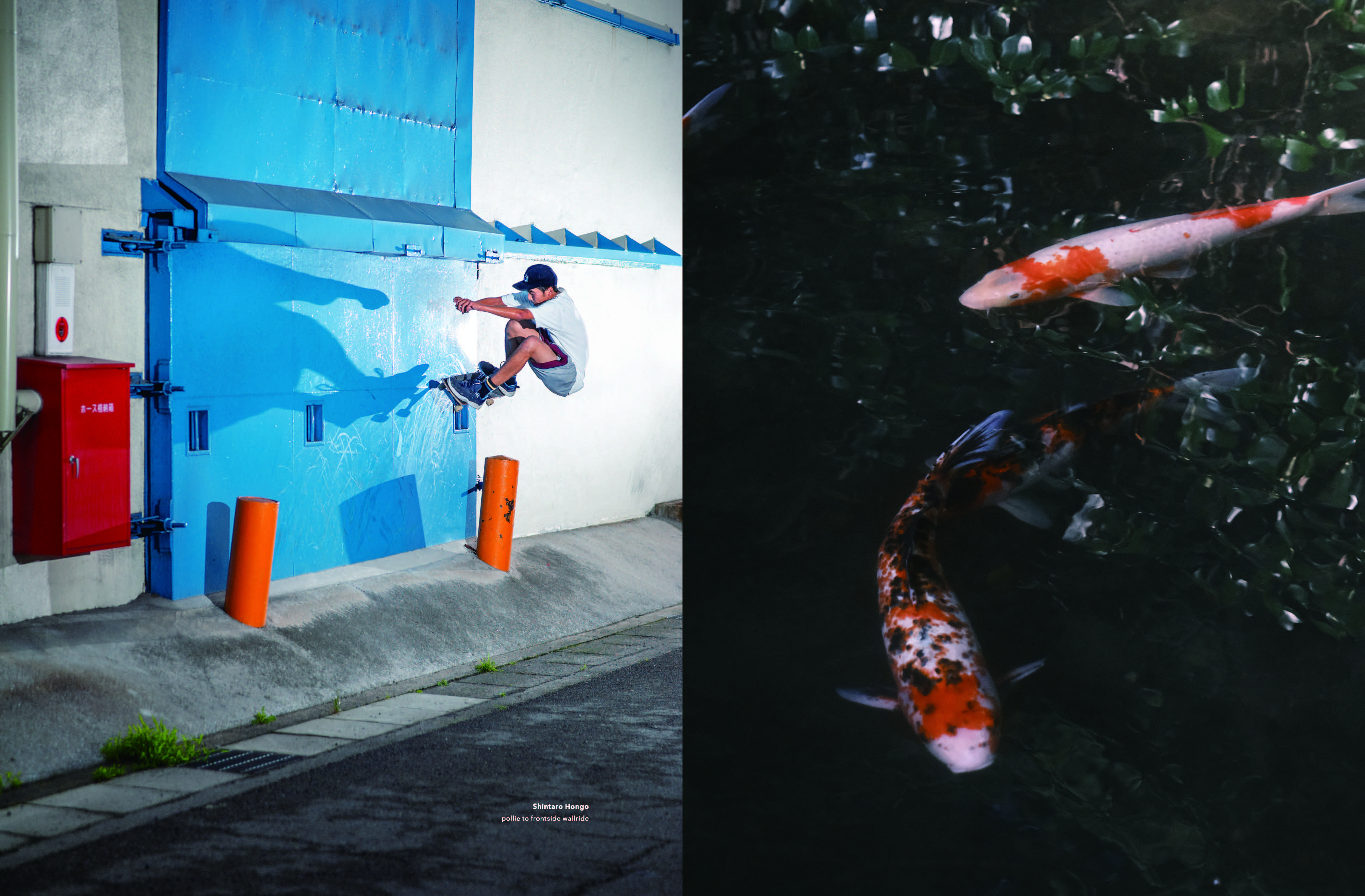 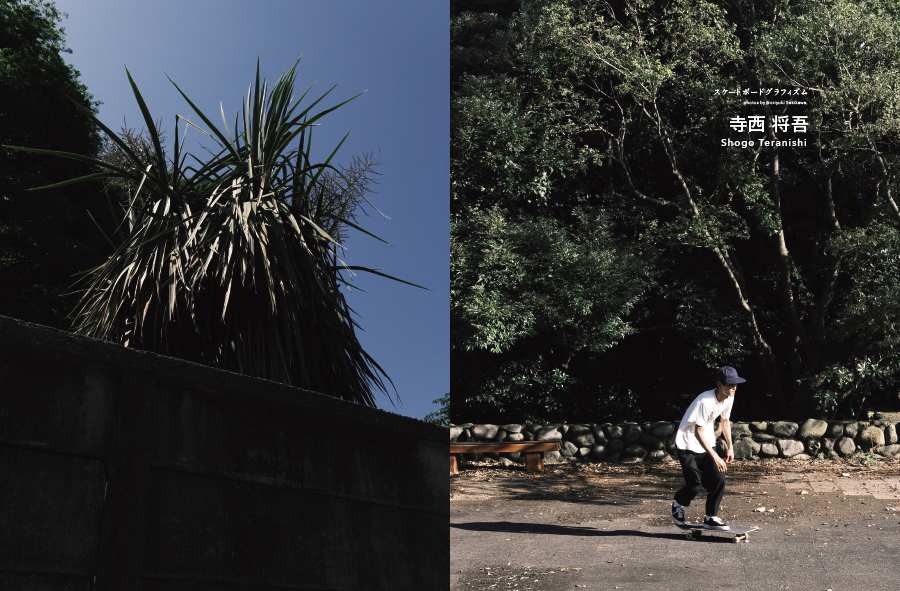 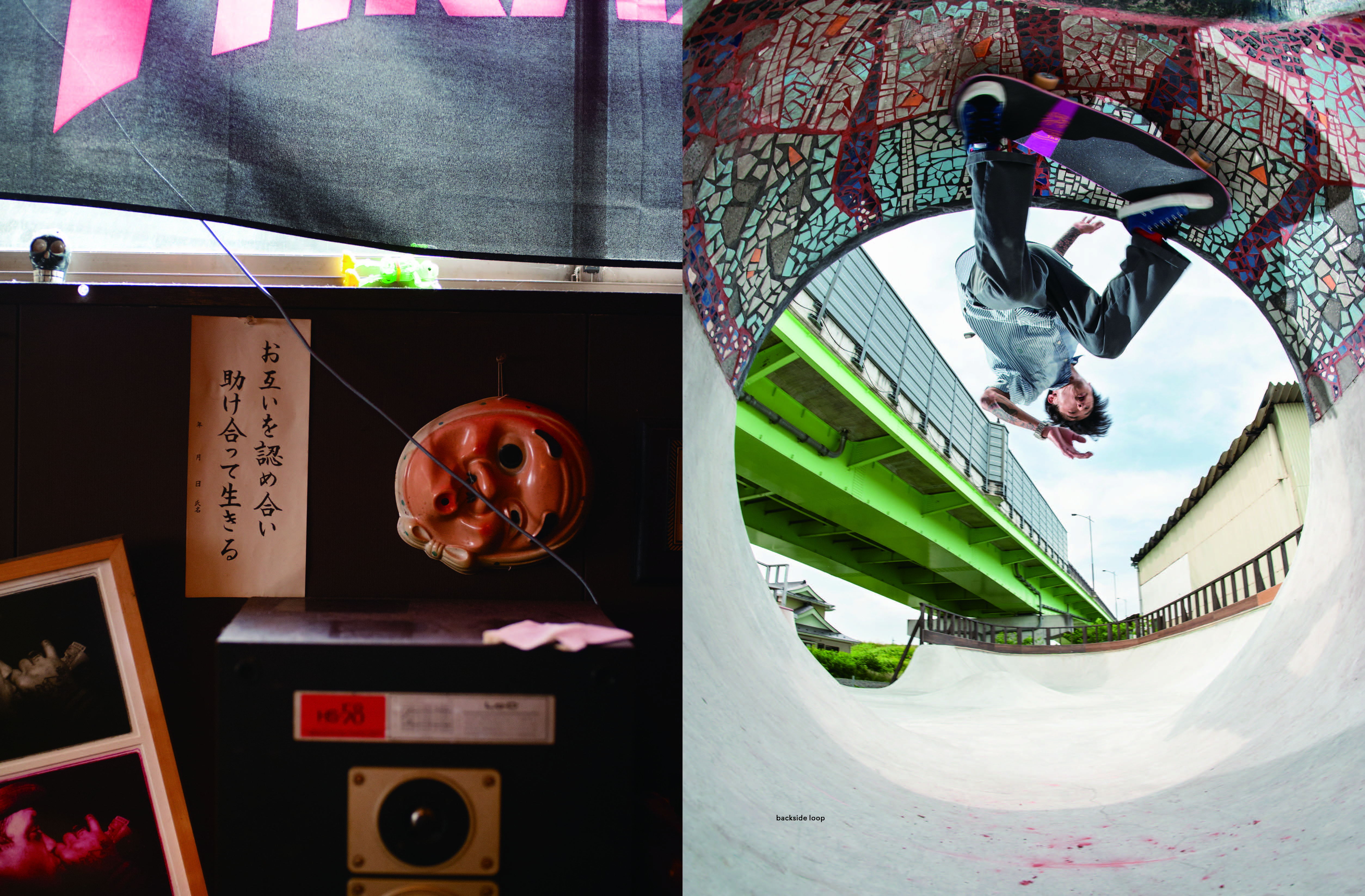 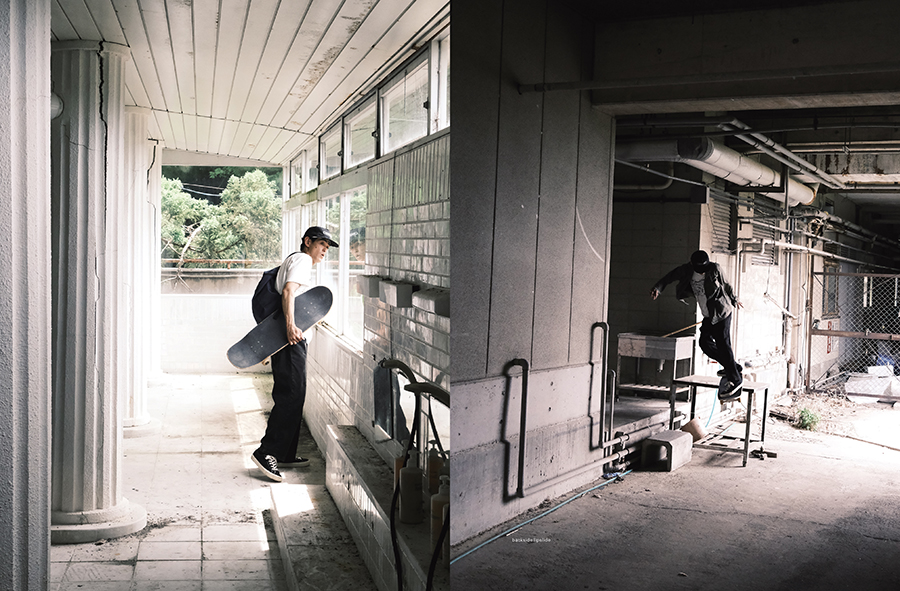 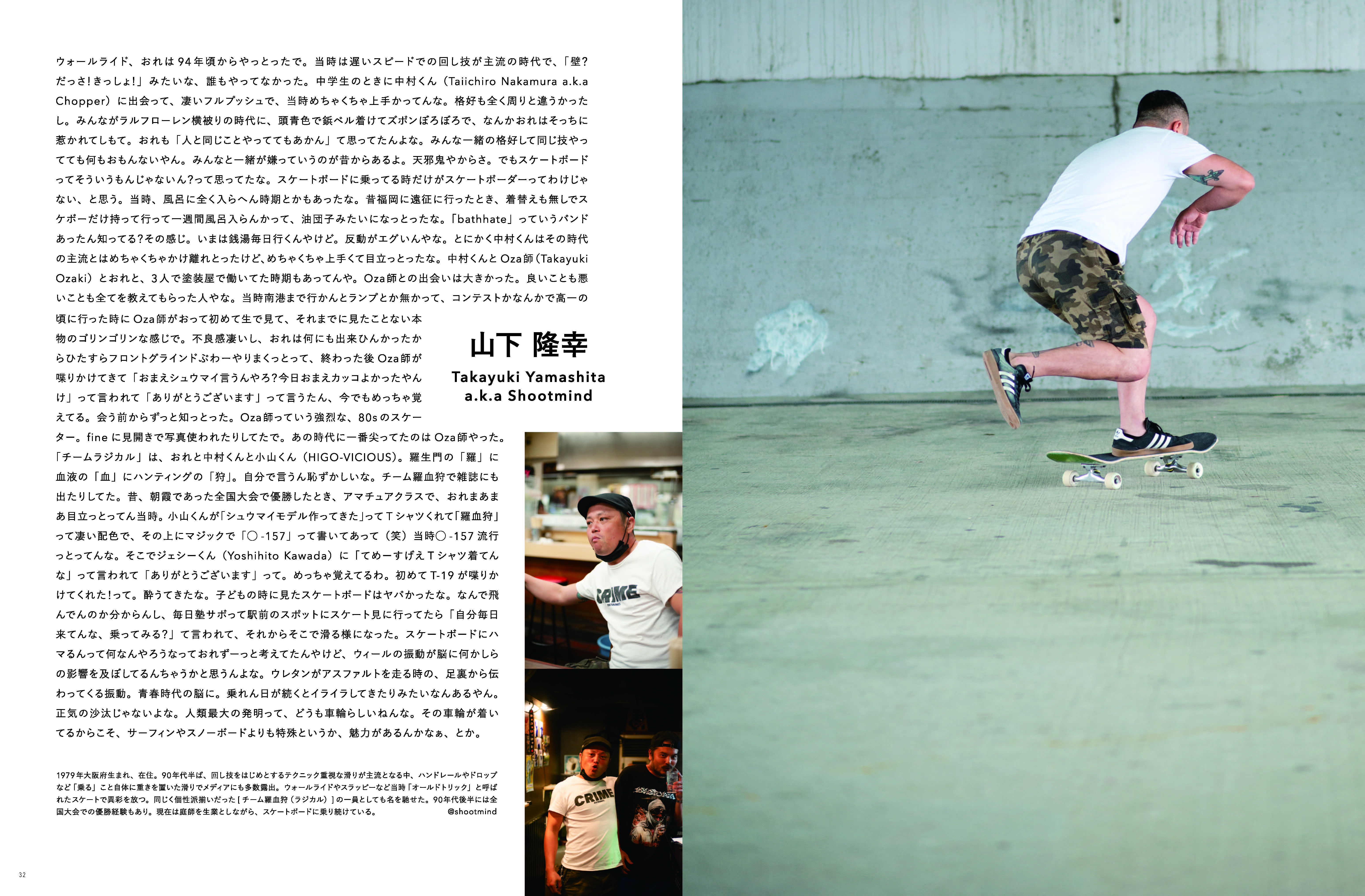 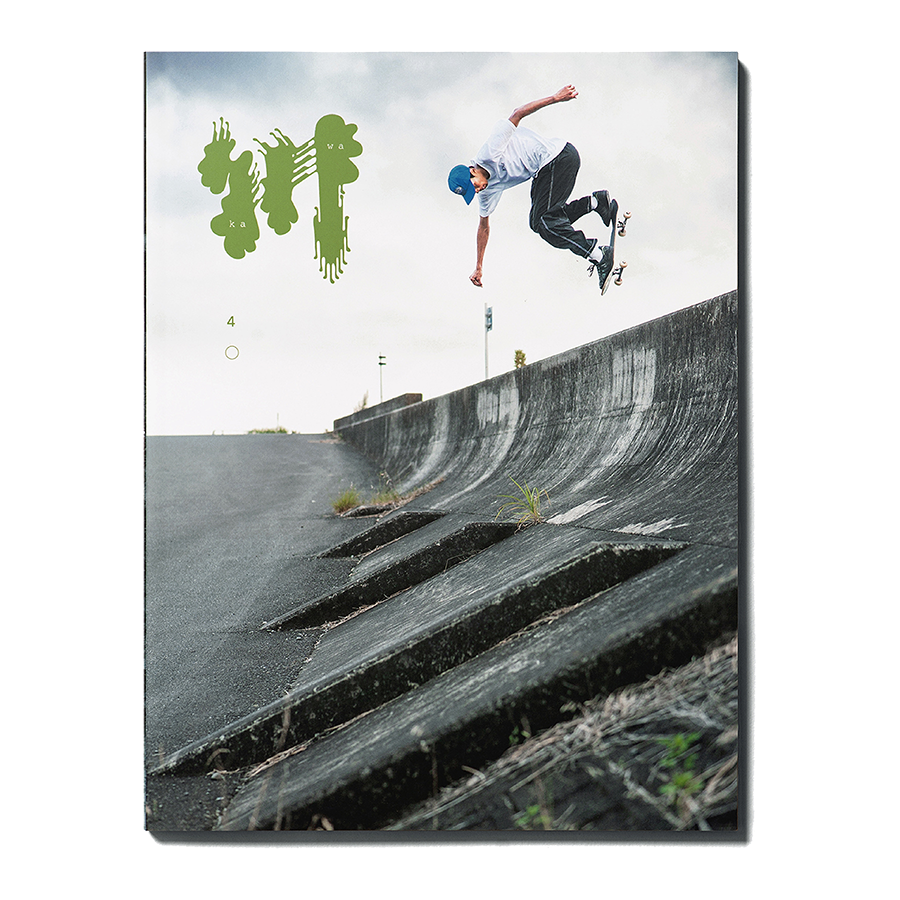 My first encounter with KAWA was when Yayoi-san, owner of Okano Yayoi Shoten, a store selling souvenirs of Yoshiwara and other goods in Asakusa, invited me to a screening of a new video by KAWA. It was held at 5656 Kaikan, an indescribably old hall in Asakusa. I was also impressed by the number of people showing up to watch the screening. They were young and old and watching the video so seriouly. I was surprised at the fact that such a less commercial screening existed among skaters, even though DVDs and books were sold.

Even if I wasn't a skateboarder or an editor specializing in photography, I became more interested in the KAWA's photographs because they had a mysterious quality that somehow drew me in. I was perfectly ignorant about skateboarding and had never bought skateboarding books before. But I bought a book of KAWA because I (selfishly) felt the coolness and vividness of skateboarders on the street, the landscape, nature, sorrow, people, and many other things of Japan from their photos.

As we talked with KAWA, we concluded that we wanted to publish a book (magazine) regularly. But not an information magazine, not a fashion magazine, not a photo book, but an unconventional type of periodical magazine (which would be difficult to sell at bookstores), and that is how the KAWA book started. Anyway, I can only say that it is a book that can express KAWA, and I still can't explain what it is like exactly. I aim to create a free book in which what the reader feels is the answer to the book's question. So, it is irregular, and I don't know if it will continue in its current form. I only feel that I am now leaving behind on paper what I captured at that moment freely and unconventionally.

I want not only skaters but also people of various genres and generations to have the same feeling I had when I first encountered KAWA. Therefore, when I do sales promotions for some fashionable bookstores or local bookstores, things like this would happen. I met a young bookstore staff who said, “I’ve never done skateboarding, but I always check the photos on your Instagram, which are my favorite.” I met an old bookstore staff who seemed not interested in skateboarding and said at the beginning,” Looks like fun!” after she flipped through some pages. She ordered the book after all.

In this world, I think that the written word is the easiest and most direct way to communicate. Interestingly, something that cannot be expressed in words can be conveyed through photography. It leads to the point that humans are full of interest. That’s why I think I am attracted to KAWA photography.

Mr. Arakawa and Mr. Sekikawa. As a person who has been allowed to see a bit of them, both objectively and from the inside, I can say that the more I watch them, the more I am interested in these two people. For example, Mr. Arakawa has read many philosophy books and sometimes tells me about philosophy and ideology. It is similar to the nature photos taken by Mr. Arakawa and his team. Maybe it's obvious, but I'm even more impressed by what they are not just photographing the subject. There are many of Mr. Sekikawa's photographs that I have never seen before. So that I cannot explain them at all, but they have a quality that cannot be put into words, and I feel that this is the kind of person who is a genius.

The meaning, or rather, amusing aspect of publishing a book on a regular basis is that it is a record of "that time." This book contains how the atmosphere, the world, and the society around us at that time looked. Recently, I have thought the book is like a kind of installation. I’ve found a rough and vague idea in KAWA, which is what I wanted to convey. I felt pressed when they kept taking pictures until a few days before the deadline, but I think this also helped to bring out a sense of the moment. They always go out to take pictures until the very last minute. I have heard that wildlife photographers also need a lot of skill and often fail to take photos for the day they have to submit them. They may be similar to those photographers.

Skateboard culture, which I feel it's made up of a unique one unparalleled in any other sport or comity. Especially when skateboarders do on the street, people have their style, which is good, no matter how they are bad at, or good at, or a weird way of skating, anything goes. If you grow up listening to what you are told without thinking, there are too many set standards that you should be like this. That’s how I grew up in this Japanese education system. I have lived my whole life feeling uncomfortable with the fact that I was heading there as a matter of course. So I feel this idea of street skateboarding is more valuable than we thought. Those who have been taught or experienced this idea have the same confidence or generosity. I feel that kind of thing.

The book contains interviews and contributions from skaters and artists that KAWA picks up, ranging from skateboarding stories to unrelated topics. All of them are worth reading, so even if you are not involved in skateboarding, please try to open the book and enjoy Kawa's work.

Kawa
This project was started in 2016 by two photographers, Shinsaku Arakawa and Tokuyuki Sekikawa. They traveled all over Japan and released a book of skaters and landscapes they encountered. In 2022, the fourth book, "Kawa 4 ‾" was released by Okura Publishing.

Mizuki Nagashima
Born in 1989. Editorial department, Okura Publishing Co., she is making books by calling on people who are "interesting" without narrowing down the genre for a small general publisher. She is in charge of a wide range of books, including picture books and photo collections.

Best dating sites for over 50