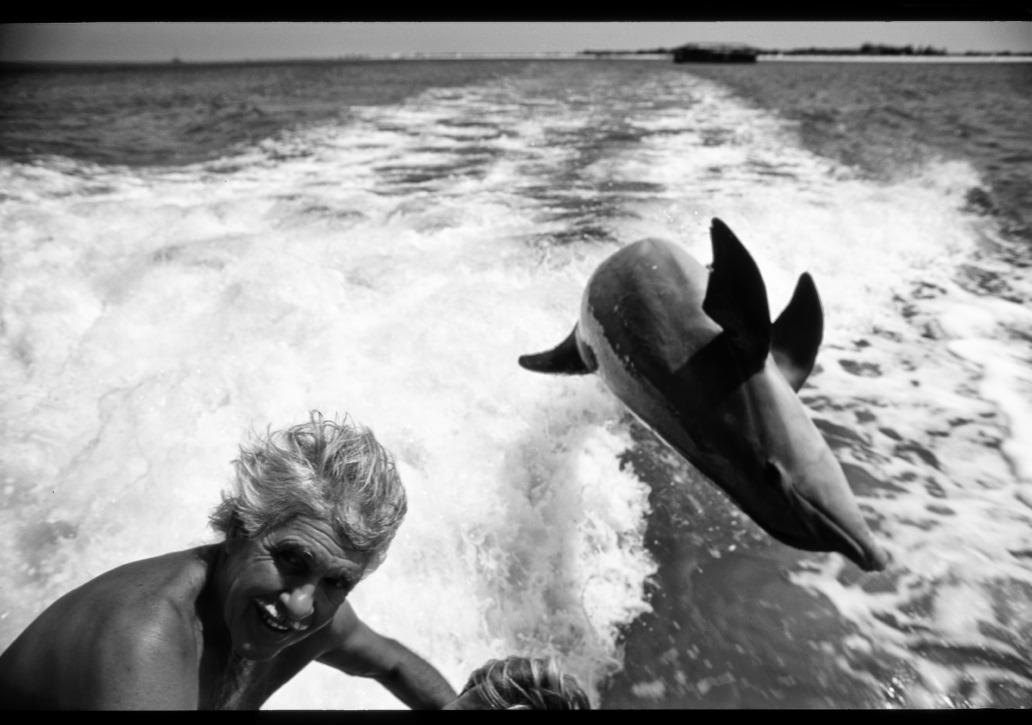 映画『グランブルー』のモデルとなった伝説のダイバー、ジャック・マイヨール。
深海に自分の拠り所を求め、イルカと人類の共生を夢見た。
自死という最期を遂げたカリスマと「兄弟」の絆を結んだ一人の日本人に、
その素顔を語ってもらった。
Jacques Mayol, the legendary diver who was the model for the movie Le Grand Bleu(The Big Blue).
He sought refuge in the deep sea and dreamed of a symbiosis between dolphins and humans.
A Japanese man formed a “brotherhood” with a charismatic man who died by suicide.
We asked him to tell us about the true face of Jacques Mayol.

"I saw a great movie over there. It's a big hit!"  More than 30 years ago, a friend of mine who spent a summer vacation in France showed me a brochure during the new semester of college. The cover that spelled out "Le Grand Blue" had the blue gradation, the silhouette of a dolphin, which gave me a nostalgic and enigmatic impact on nature.

As we watched the long-awaited roadshow, we were filled with unknown shock and excitement. You learned about the blue world in the depths of the ocean, the co-habitation of humans and dolphins, the pain of love and life, and glimpse of many other subtleties. At a time when "environment" and "peace" were not as central topics in society as they are today, this movie raised questions about them to those of us who were in a daze. It stimulated us to awaken our awareness of what was truly important.

The model for the film was Jacques Mayol. The story was about a man who was passionate about the ocean and dolphins returned to the deep blue abyss after he became disappointed as a result of being awakened to the "discrepancy" between reality and his ideal. Although the film was dramatized, it had a strange ending which made us feel that the end of Jacques Mayol seemed like a natural progression.

I visited Tateyama, Chiba, where my old friend Hitoshi Narita lives. I wanted to hear what Jacques had to say from Mr. Narita who had spent some real time with him. It was also the place where Jacques himself had often stayed.

Mr. Narita got to know Jacques when he competed World Spearfishing Championships in Italy in 1969. Their friendship began when Mr. Narita talked to Jacques, the god-like "man who can dive 70 meters underwater without oxygen tanks", into traveling his hometown Akita together with him when Jacques visited Izu in 1970.

"In a world where people kill each other because of religion and national borders, there is one form of communication on earth that is more important than language: dolphin communication. Just like you and me." Jacques adored Mr. Narita as his "little brother". The two had deepened their trust and understanding through an exchange of consciousness beyond words. Mr. Narita spoke honestly about his mixed feelings of resentment and respect for Jacques, who was sometimes selfishly pure.

Mr. Narita has a brotherly "love" for Jacques deep in his heart. "Jacques had foresight. He had been saying for a long time that "If mankind seeks true peace and environment, we need to be prepared to let go of half or more of the useful technology we’ve got." He strongly believed that his ideal world would come true as mankind approached Homodelphinus (dolphin man). Jacques said, "If there is even a hint of inspiration in the human mind and spirit, our damaged planet, Earth, will be a paradise again."

Jack's last words to Mr. Narita were "I'm disappointed in the future of mankind. I've been trying to appeal for peace and the environment in my own way, but I haven't been able to do anything to change the direction. If I were given the chance to meet you just once in 200 years, I would say, "The world is exactly as I told you it would be, isn’t it?” By that time, the human race may be gone, though. It sounds too sad. Jacques, who lived by his beliefs and was overwhelmed by regret. His message, as pure as a dolphin's, is becoming more apparent more than 20 years after his death. It will still take time, but it is definitely having a resonance in society.

Jacques Mayol
Free Diver. Born in Shanghai in 1927. He was inspired by his first encounter with dolphins at the age of 10 in Karatsu, Saga, where he often spent summers with his family. He traveled a lot in his 20s and started freediving in his 30s. In 1976, he became the first human being to dive 100 meters unassisted. Luc Besson's film "Grand Bleu" is based on his autobiography "The Day I Returned to the Sea with My Dolphin" (original title: Homodelphinus)