極北の大地を愛した星野道夫。
悲劇の死を遂げてから、時を経た現在も、
その作品は多くのファンに愛され続けている。
Michio Hoshino loved the far north.
His works have been loved by many fans
even long after his tragic death. 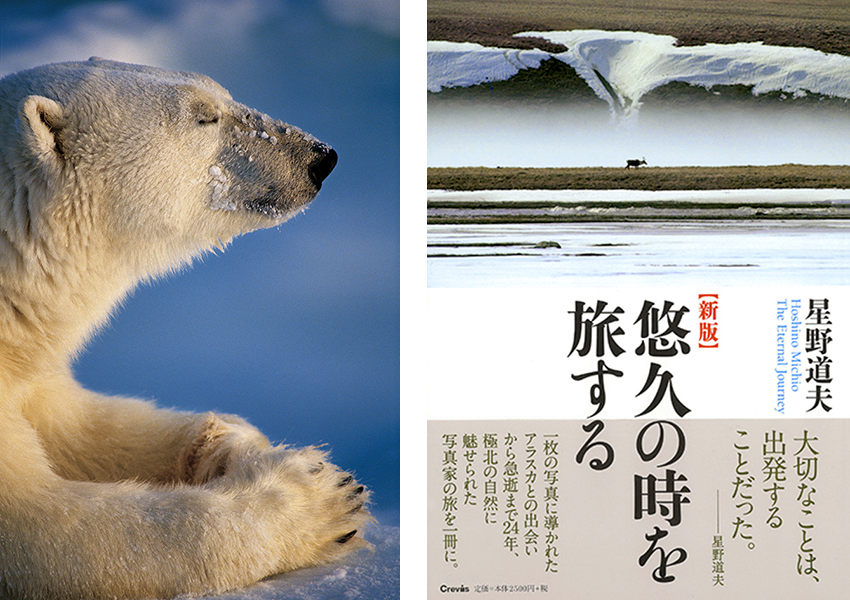 Among the many nature photographers, why is it that Michio Hoshino's work shines so brightly? The images of nature, animals, and people in the extreme places he left on film are powerful and pure. However, there is something faintly warm about it. Hoshino once wrote in his book, A Life as a Nature Photographer.
"If you were to ask me what is the most important thing you need for nature photography, I would say it is a deep interest in the subject.”
There is a warmth in the photographs. It could be the very gaze that Mr. Hoshino himself had for his subjects. The interest and love for the subject matter probably add to the brilliance of the work.
I felt that way again when I was flipping through the pages of the new edition of The Eternal Journey, published in 2020. The life of Michio Hoshino, a photographer, was probably dominated by luck. The encounter with Alaska, which would later become synonymous with Hoshino, was also a chain of luck.
In 1971, Hoshino, who had joined the university's expedition club, picked up a book in a used bookstore in Kanda, Tokyo. The young man, who had a vague yearning for the north, was fascinated by the photos of Eskimo villages in the book. He wrote a letter to the mayor of the village of Shishmaref, asking the mayor to let him stay there. Six months later, he received a reply from the village mayor, and he was accepted to stay with them for three months. In 1978, he moved to the United States to attend the University of Alaska. Influenced by the people he met there, he began his life as a nature photographer. Since then, he had been active in photography and writing, making Alaska his base of life. In 1996, he died suddenly in a brown bear accident on the Kamchatka Peninsula. It was a short life, forty-three years. This book is full of one photographer’s journey.

Mt. McKinley (Denali) at dusk in the alpenglow (summit light)

The new edition is eight years after the photo book of the same title, which has reprinted many of his photographs and essays and includes new masterpieces and three contributed articles. One of the contributions was written by Shoma Hoshino, the son of Michio Hoshino. He was only one year old when Hoshino passed away, but he wrote about his feelings for his father in his sentences. As supervised by Michio’s wife, Naoko Hoshino, the structure and content of the book are very detailed. This is an excellent book to review the achievements of Hoshino, who left many works in the past. The book is not only a good introduction to Michio Hoshino but also contains unpublished works, so fans will be able to enjoy it once again. In addition, a photo exhibition titled " The Eternal Journey" is touring around Japan. This is a unique opportunity to see the prints of his original. I would like you to follow in the footsteps of Michio Hoshino's journey.

A grizzly lurking in the grass

A family of harp seals

This book is a new edition of the photo book of the same title, which contains 229 photographs (including unpublished works) and 32 essays, published after eight years with a new representative work and three contributed articles.List price:2750 yen (including tax)Publisher: Crevis