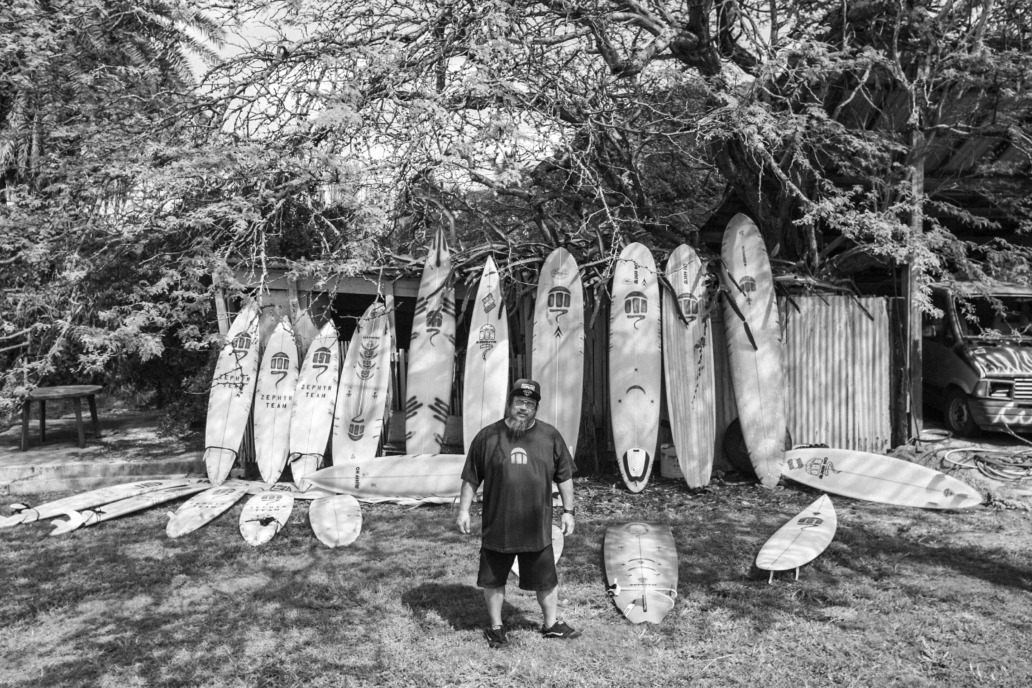 ’60 年代末から’70 年代にかけて、
サーフィンそしてスケートの世界で革命を起こした、ジェフ・ホー。
ある小さな偶然が、この男と写真家の若者に大きな出会いをもたらした。
Jeff Ho revolutionized the world of surfing and skating
in the late ’60s and ’70s.
One small coincidence led to an encounter
between this man and a young photographer. 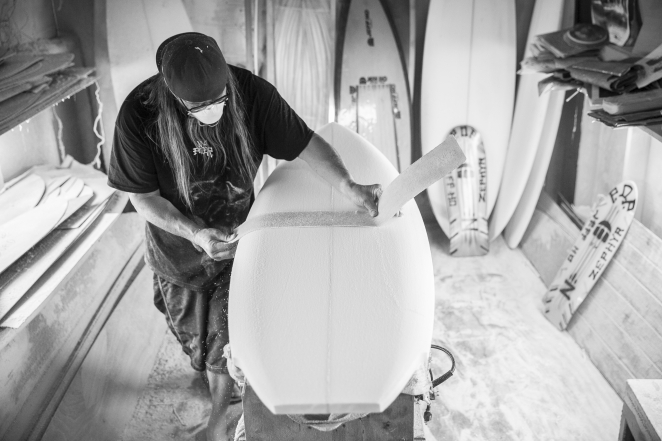 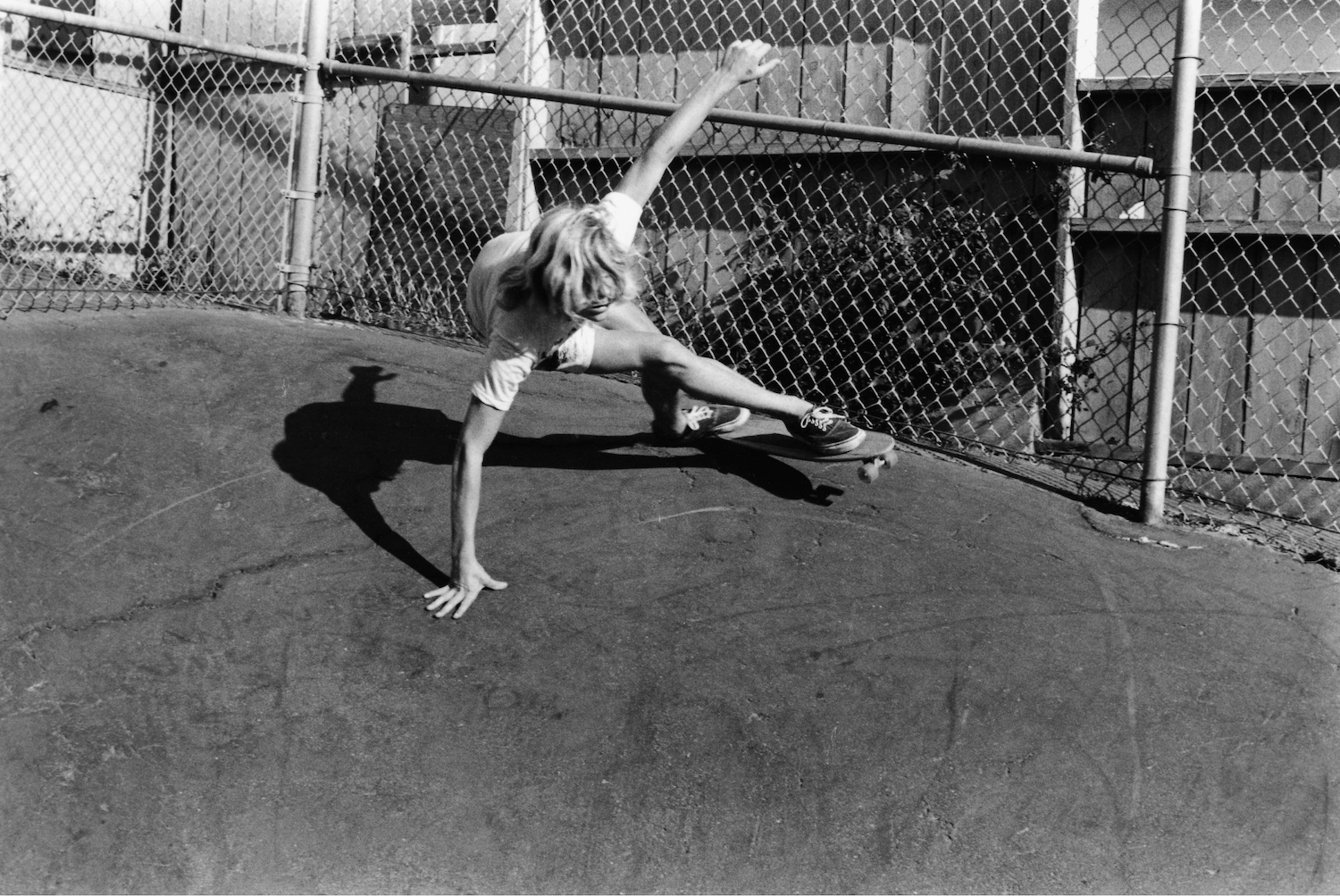 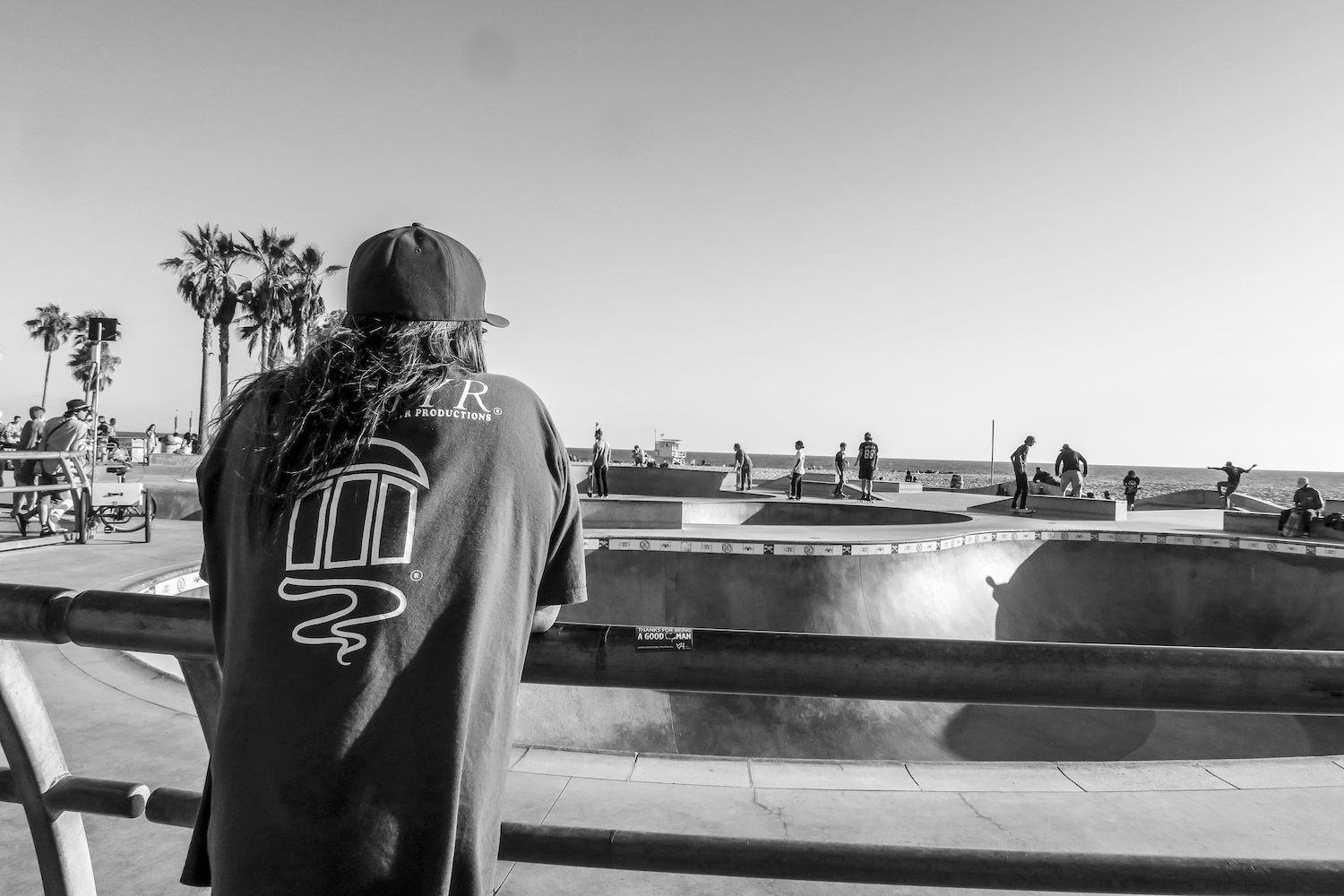 In the winter of 2000, I was spending all my time surfing and filming on the North Shore of Oahu, Hawaii. On my off days, I borrowed a surfboard from a friend and was having a great time surfing. The surfboard was a winged, swallow-tailed, tri-fin. Slightly thicker, wider, and shorter board.
The board was probably from the '70s, yellowed, old, and stocky, but it was a great board for surfing small to large waves. Looking back on it now, it was a surfboard that could be considered a modern design. I borrowed it from a friend and smashed it against a rock on the beach. I heard that the owner of the surfboard was a shaper who lived in Pupukea, so I asked my friend to draw me a map to visit him and apologize. At that time, Pupukea on Oʻahu's North Shore was a wonderful place where there were a few spacious one-story houses, and plants were growing like a jungle, just like old Hawaii. There was a shaping shack at the far end. I knocked on the door and a man with long white powdery hair and a beard, also a big dog appeared. Probably he was shaping a surfboard. The man, who gave off an unusual vibe, was Jeff Ho. That was my first encounter with Jeff Ho.

Carefully shaping and breathing soul into a surfboard

Jeff Ho, the legendary shaper of Zephyr Surfboard and one of the core members of Z-Boys, the legendary skateboard team that revolutionized skateboarding in Dogtown on the west coast of the United States in the 1970s. I had heard of his name “Jeff Ho”, but I didn't know anything about him. It was before the famous movie “Dogtown & Z-Boys” was shown. I honestly told him what I did, and apologized for breaking his surfboard. I was ready to be told off and I thought I would have to pay some money for it. But when Jeff found out that I was a photographer, he offered to take underwater photos of him surfing instead of compensation. I couldn't believe it, but he said he would forgive me.

I remember shooting Jeff's surfing at Inside Pinball in Waimea, getting the film developed, eating Mexican food together, and talking about surfing, skating, work, life, and more while playing billiards. He taught me to believe in myself and to do whatever I want. At that time in North Shore, it took a week to get the film developed. During the week, I took photos of him at Rocky, Pipeline, and other points on the North Shore. At every point, Jeff waited for the biggest wave offshore and tried to get the biggest wave he could. Jeff was so cool as he crouched down on the board and aggressively surf, just like the Z boys.

scene from the film "Dogtown & Z-Boys. The world created by Jeff Ho  Photofest/Aflo

"Char! Can you take some pictures of me shaping? Also, this shack? This shack will be gone sooner or later..." Jeff said, laughing out loud. It was the best thing that could have happened to me. He asked me how much I'd be paid, but I told him I didn't want any money. I said I’d rather pay for the surfboard he shaped. He laughed and said “All righty!” From my point of view, it was like a dream to be allowed to take pictures and even to have my surfboard shaped. He accepted a young photographer like me as one of his own, and treated me with a spirit of give-and-take. The inside of the shack was a mess of stuff, but the room had everything he needed within easy reach. There were vintage surfboards from the past as well as recently shaped ones, and he showed and explained each one. He had everything from short surfboards for surfing at Ehukai Beach to long ones (aka guns) for Waimea. He had shaped, tested ride, and evolved his surfboards. It seemed like he was always trying something new.
The Sunset Gun Jeff showed me was for himself, a long, heavy, sharp, airbrushed surfboard with presence. It was the very soul of "Jeff Ho". He took out a form, measured it, and began to cut it with a saw. Once he started shaping, he concentrated as if he was possessed by the supernatural, so that I couldn't speak to him at all. It was like breathing Jeff's breath and soul into the surfboard. I was so focused on the shoot that I didn't realize how many hours had passed. He shaped and finished one surfboard at a stretch. In this age of mass production and mass consumption, a hand-shaped surfboard was a one and only product.

I am still in touch with Jeff and we are working together on his art book project. I'm not sure when it will be ready, but I'm looking forward to it. Jeff is like a teacher to me, teaching me pride and passion in my work, the important things in my life, and many other things. Jeff, who values the invisible, is mysterious and at the same time broad-minded. He has very much fascinated me since I met him.

A usual scene of Jeff Ho, at a skate park in Venice, where regulars gather as the sun goes down.

Char
Photographer. He captures the soul that dwells in all things and the universality that exists within with his unique perspective and is active in a variety of fields beyond the realm of documentaries. The light he captures while coexisting with nature is powerful and full of the radiance of life.
www.charfilm.com