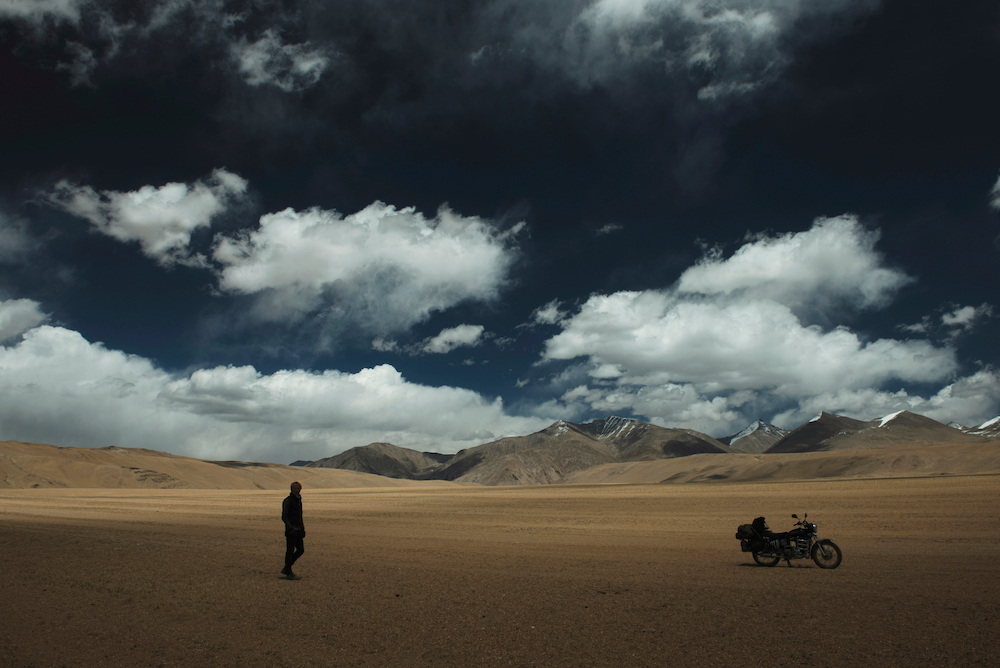 写真家が思い出の一枚から、その裏側にある物語をたどるフォトエッセイ。
シャッターを押した瞬間の時間と空間がフォトエッセイとしてよみがえる。
今回は、宮田祐介のアジア大陸、バイクの旅。
A photo essay in which a photographer traces the story behind a memorable photo.
The time and space of the moment
when the photographer pressed the shutter of his camera come back to life as a photo essay.
This time : Yusuke Miyata’s motorcycle trip to the Asian continent.

I got on my motorcycle at sunrise and rode until the sun went down. While riding it, I had plenty of time to think about things, but most of it was spent worrying about how much gas I had left and where I could safely spend the night. I slept in different places every day, but to cover the various aches and pains of my body that arose each day, I would take a painkiller in my mouth and wash it down with a cold beer if I could get one. I never touched any of the drugs that were available in abundance on the way to my destination, not because of ethics, but because I knew that they would interfere with my judgment while driving.

I was riding a motorcycle that I had built myself across the Asian continent. Every day, the language the people spoke and the clothes they wore changed. And the gods they worshipped changed as well. Male figures. Female figures. Half yin and yang figures. The form of a beast. A figure without any figure. After passing through the world of Hinduism and Islam, and entering the steep Himalayas, the familiar world of the Buddha appeared. My relief was short-lived. The altitude rose to 3,000 meters, then 4,000 meters, and then 5,000 meters, far surpassing the height of Mt. Fuji. We, that is, I and my iron partner, were deprived of breath and body heat. I've always been indifferent to things and tools, but even a rusty lump of iron like this could become attached to me after a long journey. I didn’t name it, though. Whenever I lost feeling in my fingertips due to the cold, I would keep my leather gloves on and press them against the hot engine to keep them warm. At night, I cut down on my sleeping hours and polished the sooty spark plugs to a shine with a file and cloth under the moonlight. We kept each other alive. However, our relationship was far from trustworthy. My partner always broke down at some point every day. It was partly my fault for doing the maintenance, but as long as no problem making the motorcycle undrivable that day, it made me happy. And even when my partner was in good shape, there were many times when I, the rider, was not in good shape. And only when both of us were in good shape did we run into unexpected trouble, as was usual on a trip.

We made it through, and after a month, we found ourselves in the desert under the black sky typical of the highlands, with no signs of life, let alone traces of people. There were no paved roads, not even the wheel tracks of those ahead of us. My heart was pounding with excitement at the sight of something I had never experienced before. I kicked up the gears, turned the gas pedal to the maximum, and sped up, not caring if the luggage strapped to the seat would come off. I felt a sense of freedom in my heart, and I screamed. After enjoying it for a while, I parked my car, lay down in the desert, and lit my favorite cigarette that I had brought with me from Japan, the last of which was running low. There was a large cloud floating in the sky. The shadow of the cloud was moving slowly through the desert, coming closer to us. Even with my eyes closed, the feeling of the sun burning my skin subsided, and I knew that we were in the shadow of that big cloud! There was no sound around us, except for the wind blowing my partner and my luggage around. If someone had walked by, they could have given me some water. If it had been a nomadic family, they might have let me stay in their tent on that night. As I thought about this, I suddenly began to think about my future. About this trip. What would happen after I returned to my country? After giving it all some thought, I hoped that the comfortable feeling I had now would last as long as possible.

I looked at the mountain ​I had come from. An awkward line stretched from there to here. The casually but somewhat meaningful winding lines were undoubtedly tracks made by my partner and me. It reminded me of when I was a boy. Even though I tried to escape school, get off the predestined track, ride a motorcycle in groups, pretend to be a bad boy. In the end, the road was made by adults. If you were to ask me how I feel now as an adult, I would say that there is not much difference. I feel like I'm walking my way, but I also feel like I still play into someone's hand. Unlike my youth, when I sought freedom and liberation, now I only search it for one thing: my work. It is a work of art. It's like a track that my partner and I have made in this nameless desert. As long as it doesn't get trapped in someone else's tracks, I am always free to go where I want.

Yusuke Miyata
Photographer / music creator Born in Takasaki, Gunma prefecture.He went to the U.S. by himself at the age of 17 to become a music artist. With a strong interest in ethnic music, he discovered photographic expression while traveling around the world.
www.yusukemiyata.com