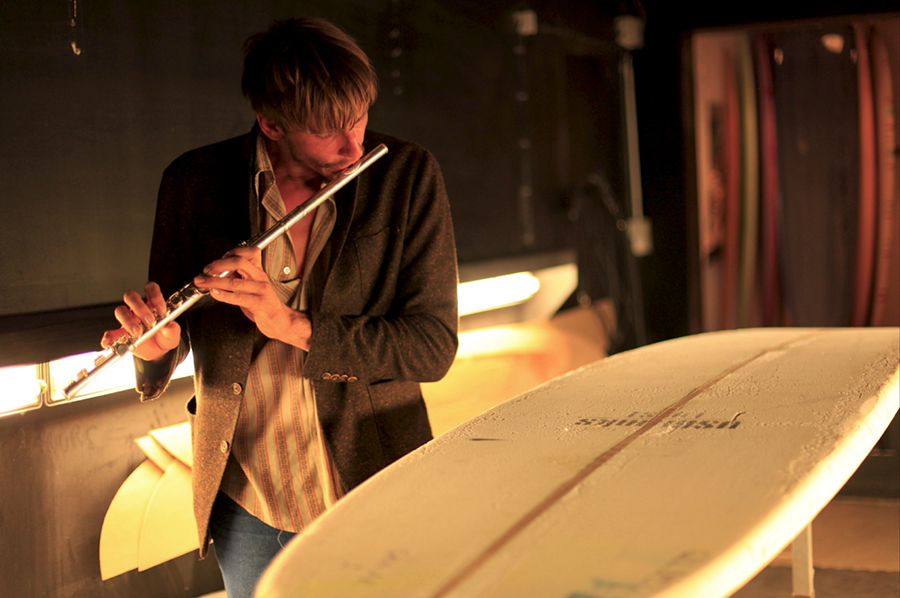 2000年代初頭、カリフォルニアのサーフシーンに
彗星のように現れた天才サーファーがいる。
その名はロビン・キーガル。サーフボードの作り手として、
その後のロングボードシーンに大きなインパクトを与えた。
無名の時代から現在まで、レンズを通して見つめてきた写真家が、
奇才の内側に迫る。
In the early 2000s, a prodigious surfer burst upon the California surf scene.
His name is Robin Kegel. As the creator of surfboards,
he had a much impact on the subsequent longboard scene.
A photographer who has looked through the lens from his days of obscurity to the present day,
takes us inside the mind of a prodigy. 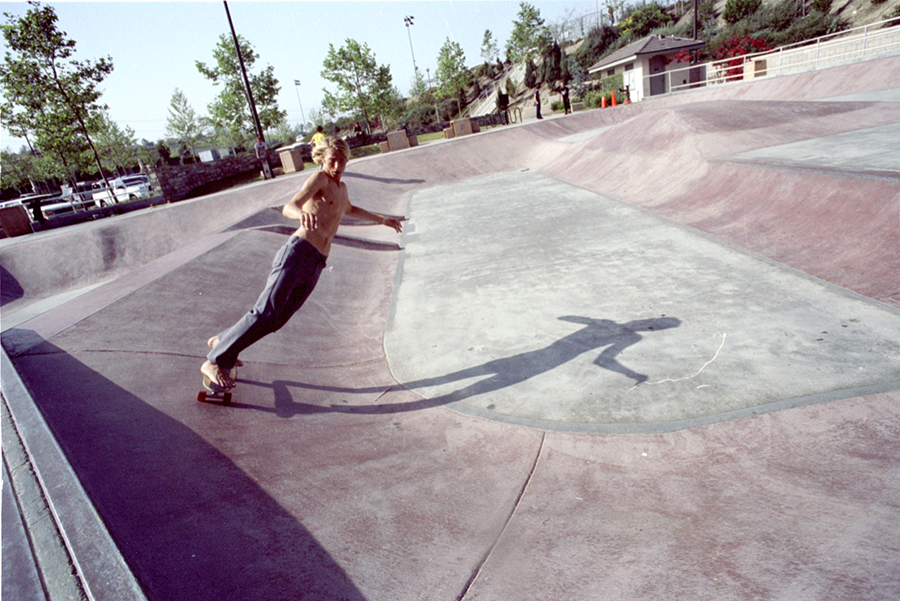 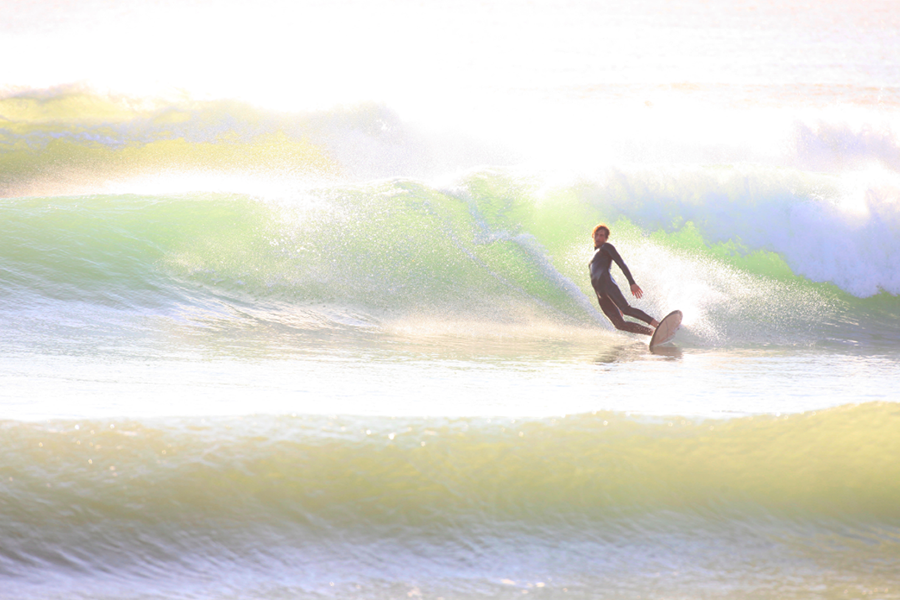 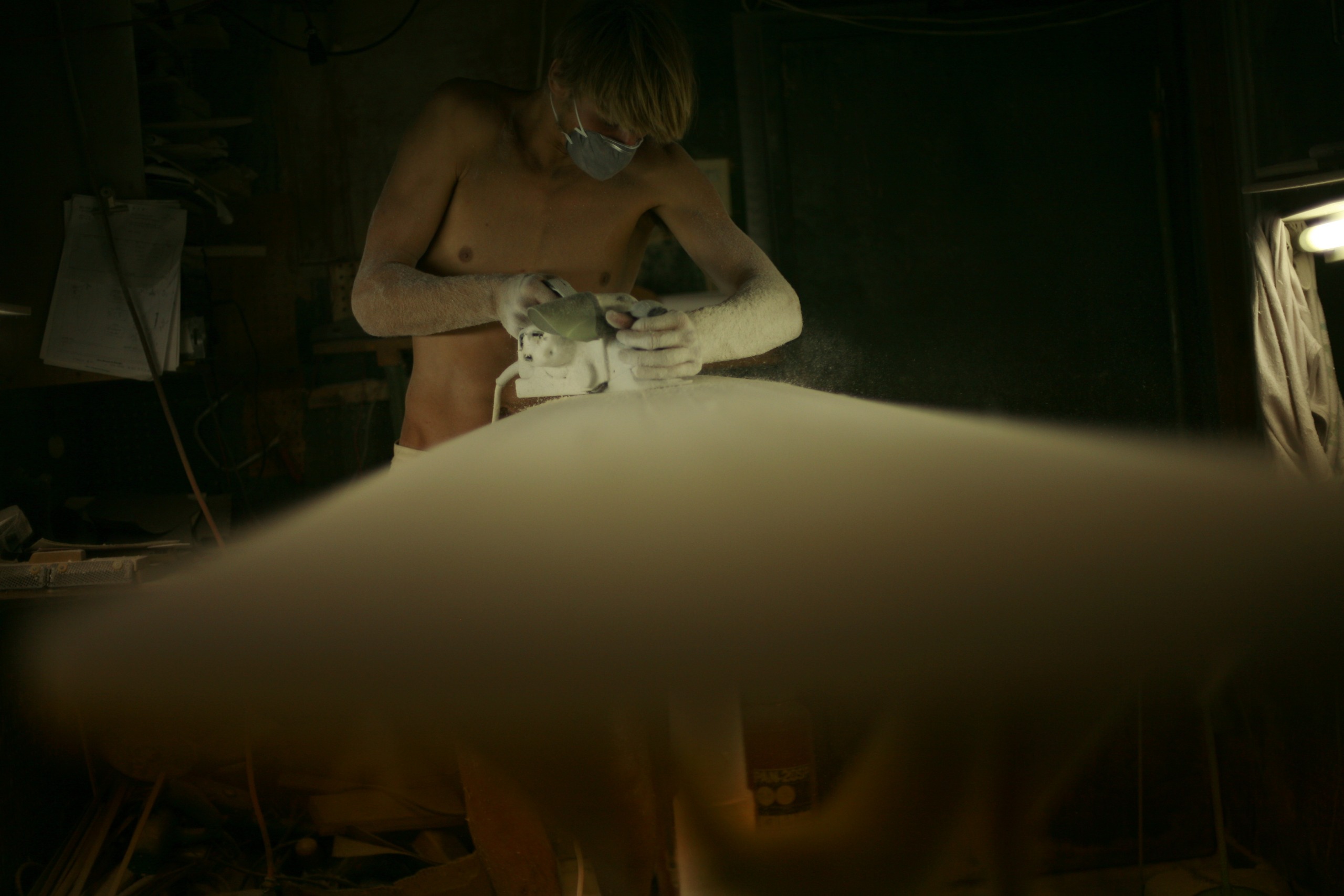 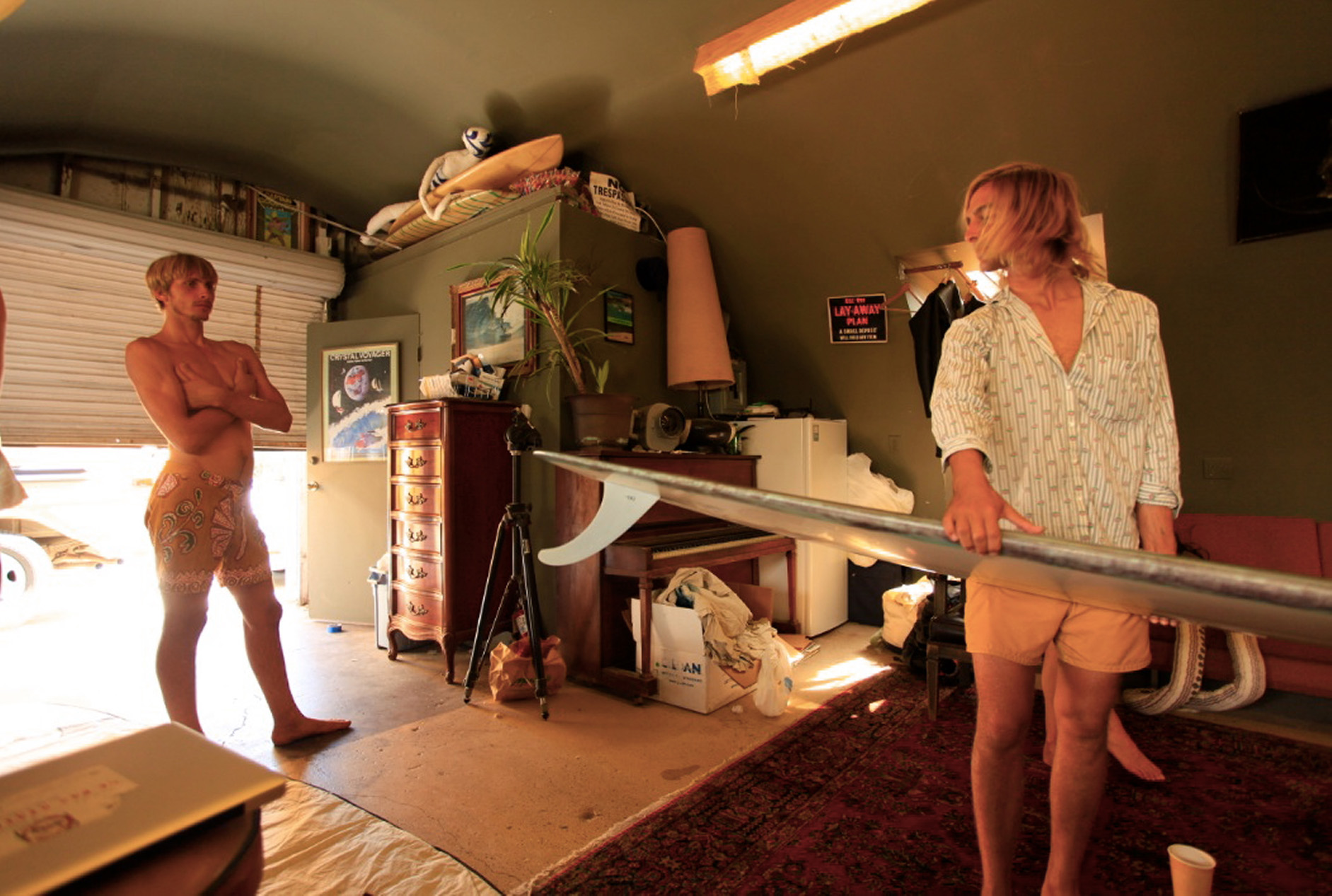 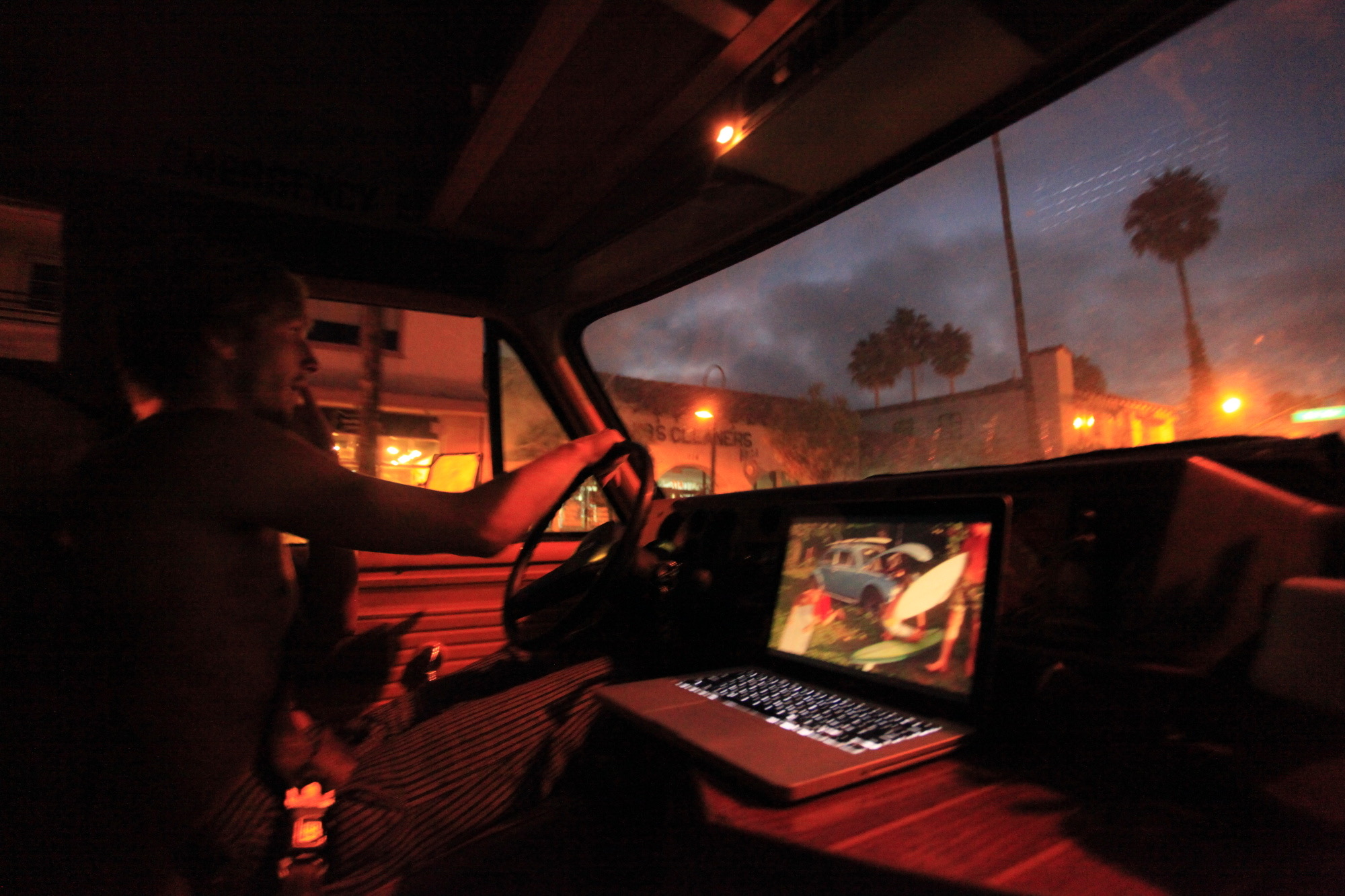 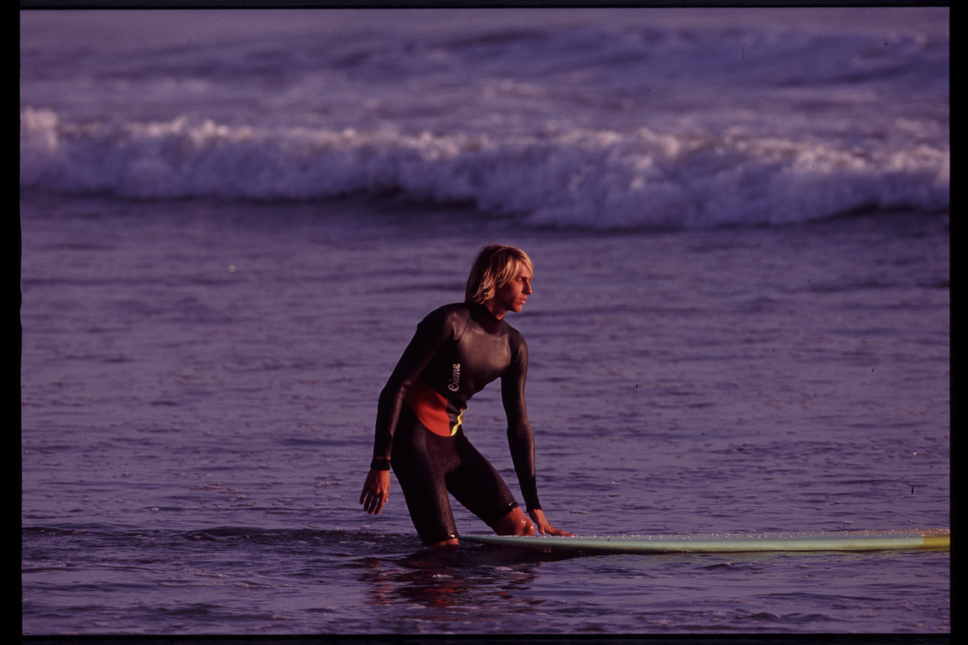 I remember the first time I encountered and had a session with him.
I can't describe it well, but it was eccentrically intense. He wasn't just like a kid who had been given an instrument for the first time and was playing it with intensity. He has something wonderful. He was always busy. But somehow, I didn’t think the rhythm he played was bad, in fact, I think I was charmed by how it was. I wasn’t feeling like being in the dark. I didn’t feel uncomfortable while being with him. Perhaps he didn’t ignore the rules. That’s why.
I had a Nikon Fe-2, and I naturally set up the camera and changed films several times. At the time, he was suddenly trying to skate in the garage of the house he had newly moved into, hammering down plywood panels to make banks. He was doing things that would normally get them evicted immediately without a second thought. A blonde kid who seemed to be a skater came over from somewhere, and after about two hours they beat up the walls together, the banks were crushed and the session was over. When we realized that those panels were meant to remake the garage into a shaping room, they were already trashed. But I remember everyone who shared the moment was ecstatic to have done it and was drinking beer.

At the skate park in Dana Point, California Barefoot! It’s so Robin.

Robin Kegel knew how to charm people. Perhaps it was his natural disposition. He was about to develop his talents as a shaper. He was going to start a shaping shop in the garage of his house, just as the term "garage shaper" was coined in the golden age of surfing.
As if he was guided by his predecessors, he began his own life as a shaper. He continued to create innovative and beautiful boards with shapes and color schemes in San Onofre Beach, California, just like looking ahead of the times. Cordy Simpkins, CJ Nelson, Alex Knost, and Christian Wac were the coolest single-fin longboarders in the early 2000s. They rode his beautiful surfboards that everyone would envy. Moreover, they rode them with extraordinary speeds that were characteristic of his surfboards with rare talent, and they made beautiful arcs on the California waves.

When they rode the boards Robin shaped, they didn’t look like the rodeo riders on the restive horses, but they were like the best and the coolest ballet dancers dancing with those horses.
Moreover, Robin probably attracted everyone even more because he didn’t only create those boards, but he was the best of the best rider of his surfboards. Was the board he was creating still not the superb board he had pursued then? He was chasing something new and different.
Definitely, the boards that Robin shaped were different from others. That’s not the only reason those coolest and discerning surfers wanted to ride his boards. But they deeply understood that Robin was trying to evolve the longboard based on history and after much elaboration and refinement. Although they might have been annoyed by his eccentricities, they were more quick to appreciate him than anyone else.

He got the coolest surfers and those who were in pursuit of authenticity in those days involved with his work. Decades after we met, Robin is now well known not only by surfers who love single-fin longboards but also by countless others, thanks to his wide-ranging vitality.
Robin's test board trips to many countries are accompanied by people in all types of business, not just surfers, including musicians, clothing designers, artists (!?), chefs, lawyers, and nice girls. He is surrounded by surfers with strong characters who are truly multifaceted.
Although Robin seems to devote only to surfing, his childhood education may have affected him to acquire deep knowledge of art and music. He is inspired by it and reflects it when he makes his boards. So, it seems to me that people who are very conscientious love what he has created.

Robin's shaping is as groovy as a musician's. Shonan, 2009

Single-fin longboards have a long history and are a wonderfully nostalgic and aesthetically pleasing culture. The heroes were born from the precise manner in which they rode gracefully without wobbling on their boards, even when they were in dangerous positions, setting their boards where the waves were strong and dangerous.
There is proof that not only the surfers but also the shaper, the creator of the board, have continued to evolve in harmony with each other. Thinking about Nostalgic and aesthetic culture, of course, there is the idea of continuing to ride the old vintage boards as they were. However, in the words of a long-established ramen noodle shop, "The same old taste is not the same old taste, but rather a little bit of seasoning and ingredients have been changed to suit the current times.” A never-ending fine adjustment, which is a "trim" as in surfing, sounds fascinating.

At his shaping room in Dana Point with Alex Knost

Vintage boards remain the same, but the quality of the waves at each point has changed due to changes in the natural environment, so it is so hard to experience those days in the same situation. You can say that riding a vintage board in today's waves is a very cool style. But I think Robin's approach has developed from a different angle, from his kind of geek knowledge.
The revolutionary evolution of shortboards in the late 1960s and 1970s was a period of the shortboard revolution when boards became shorter and shorter to make more rapid turns than longboards. I remember Robin saying, “Even if longboards evolved, you'd still be expected to make sharp turns, and this is what I will create.” What a welcome relief for long boarders. Or is Robin a contrarian?
From my point of view, it was as if he was being guided by nature. His life was all about surfing. Even after dinner, he was always talking about surfing and the next board he was going to create. And, strangely enough, there was always beautiful music playing at that time.
It was Wagner, Miles Davis, Thelonious Monk, and even opera. I think jazz was the most common. I remember it being played when he was shaping late at night. His approach to his work was to place himself in the midst of the finest and create something even more extreme.

After a surf session in San Onofre, California Heading home while watching the movie "Revolution"

I think he was seriously prepared to live in “It”. “It” means aesthetics sense. He never skimped on his meals, and he lavished himself with every possible luxury without regard to money.
"When you're eating, I'm thinking about surfing.
"When you're sleeping, I'm shaping boards.
"When you're riding the waves, of course I'm riding the waves."
Not the words of a famous boxer, but that's how he goes.
His childhood might make him find his place only in the surfing world. Because of his family background, he has felt comfortable at the beach.
And he has continued to show who he is and made a name for himself. What is noteworthy about him is that his heart is filled with a hungry and inquiring spirit and a desire to create the ultimate work of art. Isn't it great determination to bet his life on that and keep running? And I even think that the boards Robin creates will be like haute couture clothing or ceramic works.

He will continue to engage surfers as well as single-fin longboarders. Like the Pied Piper of Hamelin, the consequences and interpretations will be left up to the individual. I hope Robin keep on making a fine adjustment and leading the single-fin longboarders.
“Surf is Free."
These words were casually displayed at the first event hosted by Robin in Aoyama. We will talk about it again somewhere else.

Profile
Photographer. Born in Kugenuma. His life work is to travel and photograph surfers in Japan and abroad, including Robin Kegel. He is known for his surfers' riding, lifestyle scenes, and portraits taken from his unique perspective. You can order his works at the web gallery. https://www.perophoto.com/

Charming Things to Do in Belize

Locate Me a Sugar Daddy Usa